Revisiting the Myth of the Gap

The Forest Stewardship Council (FSC) is currently engaged in an important update to its central Chain of Custody (CoC) standard.  The discussion draft of version 3 of FSC-STD-40-004 is the result of over 2 years of work by a small working committee and was published for the first time after many delays in December 2014.  The first public comment period ends on 28 February 2015.  We encourage everyone with an interest in this document to provide FSC staff with your feedback.

Concurrently with the review of the new 40-004 draft, FSC staff have also launched another initiative that promises to change the very nature of Chain of Custody certification.  This initiative is not exactly new.  It has been in discussion for several years, and has its roots in dis-satisfaction with conventionalal third-party certification and traceability standards.  At some point, an idea was floated that if only all sales of FSC products were recorded and tracked through a single, centrally managed database, this might eliminate all the confusion, misapplication, and dishonesty in the marketplace.  The idea was initially laughed at, and broadly ignored by the business community until about 2 years ago.  By this time, FSC staff had engaged IT consultants and built (at great cost) the first version of what is now called the Online Claims Platform.  We began writing about the OCP in January 2013, when we first called it “a big mistake“.  Here is a list of blogposts that have explored the topic.

Last week we called attention to FSC’s latest initiative to promote the OCP again.  The case boils down to a) a fundamental “flaw” or “gap” in conventional Chain of Custody (CoC) certification; and b) a new tool, provided by the FSC, to solve the problem.  We contend that the “gap” in CoC is a myth, and that acknowledged flaws in the program can be best addressed within the existing system.  We also are convinced that broad implementation of the OCP will be an expensive disaster that could do irreparable harm to the FSC.  Let’s explore why.

The case for Transaction Verification and the OCP

In their recent presentation on Transaction Verification and the OCP, FSC does a good job summarizing their position in three key slides, the first outlining how conventional CoC works. 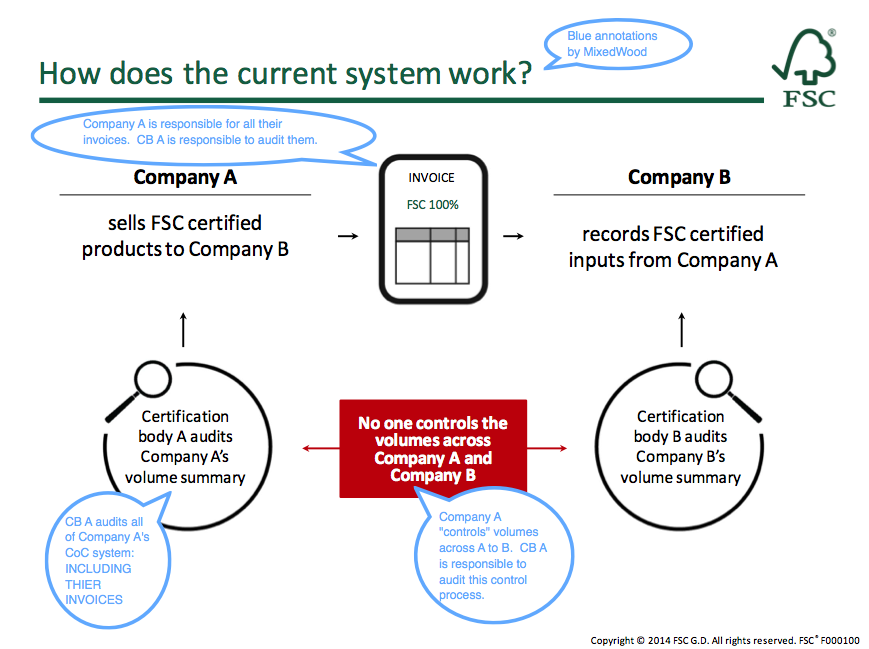 There are 2 important errors in this slide.

1)  Inside the left-hand, magnifying glass graphic, Certification Body A is described as only auditing Company A’s volume summary. This is misleading, as any auditor will tell you.  CB A has the specific responsibility to audit the whole scope of Company A’s system.  Importantly this includes their invoices.

2) The invoice is shown to be “floating” in between the scopes of the 2 certified systems.  In the red box at the bottom center, FSC asserts that “No one controls volumes across..” the 2 companies.  This statement is wrong.  Company A “controls the volume…” and CB A has the responsibility to verify that they conform to standard requirements.   Also, as we noted above, CB A is directly responsible to verify the accurate and proper use of CoC Claims on invoices issued by Company A.

FSC’s next 2 slides describe the 2 versions of what they term “origination errors”. 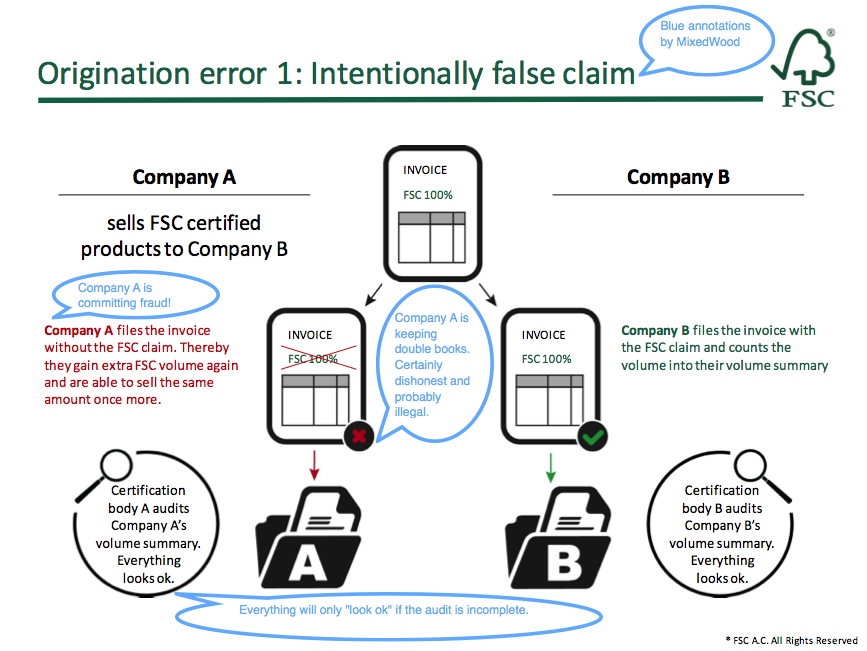 In the slide to the right (Origination error 1) FSC describes a scenario where a Company A delivers an invoice to Company B (their customer).  Subsequent to the sale, Company A then revises – or more accurately falsifies – their invoice before filing it in their record-keeping system.  The scenario is correct on the Company B side.  They will receive an invoice with an apparently valid claim, and their auditor (CB B) will have no basis to question the validity of their system.  Once again, FSC seems to limit CB A’s role to auditing Company A’s volume summary.  This is incorrect.  CB A is responsible to audit the entire CoC system, including invoices.  It can be challenging to audit a company that is being intentionally dishonest.  But that is part of an auditor’s job.  Company A, in this scenario, has committed fraud!  And CB A’s auditor is the one who has the responsibility to uncover and challenge this fraud. 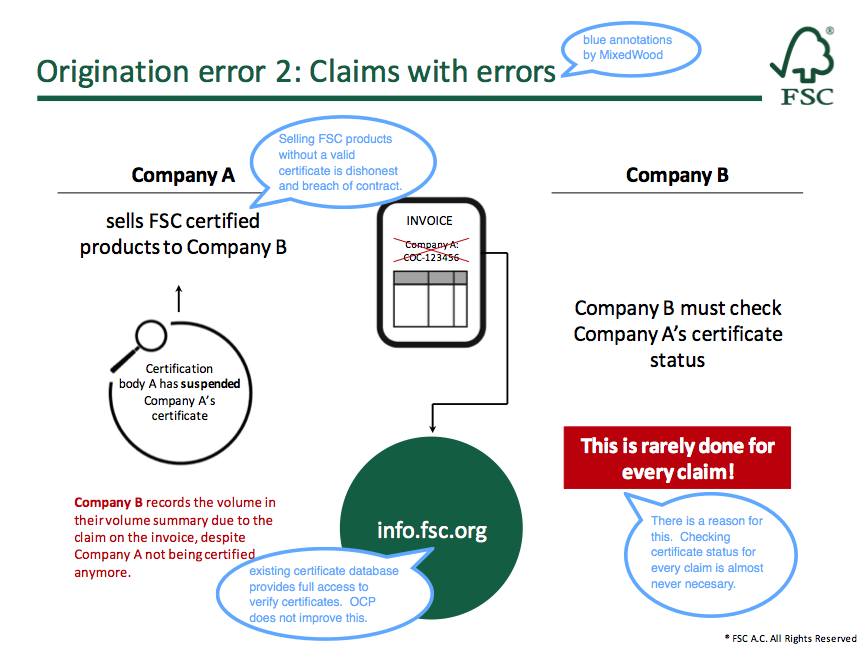 The slide on the left (Origination error 2) is even more puzzling.  Here, Company A is described as selling a certified product (with an invoice claim) after their certificate has expired.  CB A has the responsibility of notifying Company A that their certificate is no longer valid.  If Company A continues their FSC business without a valid certificate, they are in violation of their contract with FSC, with their CB, and probably in violation of Trademark protection laws as well.  Company B already has the responsibility to verify the certified status of its suppliers (including Company A).  FSC’s remark that this is rarely done for every transaction is quite correct.  It is also correct that verifying certificate status for every certificate is almost always excessive and unnecessary.

Fundamental Flaw or Life in the Real World?

The 2 situations that FSC describes as “Origination Errors” are real.  They certainly occur and should be taken seriously.  The mistake in FSC’s logic is to describe these situations as a fundamental gap in the Chain of Custody concept.

These are unavoidable facts of life.  FSC is not, and never will be, immune to either.  Unlike most business sectors, though, we have the advantage of a third-party verification process.  If we think that there is either too much dishonesty, or too much error in the FSC CoC system, the answer is to strengthen the certification and verification system we already have.  There are some practical ways to do this, as we can see below.

FSC’s current path is to essentially discard the current CoC system in favor of a system that requires each buyer of FSC products to (somehow) audit their supplier – based on a yet-to-be-defined risk matrix.  Or, alternatively, to convert our entire marketplace to a centrally managed, master, transaction processing database; designed to reconcile an entire world’s trade in wood and paper products.  They have been told repeatedly – by people in a position to know – that this effort is entirely impractical.  They need to be told again.

We agree that reducing errors, and isolating and challenging dishonesty is desirable.  Fortunately there are several practical options to pursue.

1) Simplify the standard. Nearly everyone who has any exposure to the FSC program – including its staff and key supporters – agree that it has been allowed to become much to complex.  Complexity adds cost, and complexity also creates errors.  The task of simplifying CoC has always been treated as something that would be “nice to do someday”.  We believe that we have an unprecedented opportunity to make progress on this now.  A simplified standard will immediately reduce errors, and allow auditors to focus their attention on items that matter.

2) Focus on auditing.  The only practical mechanism that exists to identify and challenge intentional mis-use of the FSC claim are the people who’s job is to regular check on each and every certified company.  Auditors and Certification Bodies (CB’s) should be held to high standards of professional conduct.  They should also be freed to apply their considerable skills and experience to the verification process.

3) Risk-based evaluation.  We are pleased to see that FSC is already working on this idea.  We should stop pretending that every FSC transaction presents the same risk to the system.  This is simply untrue.  Certain types of CoC applications are known to generate errors.  Certain parts of the world are documented as higher risk for illegal or dishonest business practices.  And certain parts of our overly-long standard do not require regular verification.  In short, we can and should be working smarter, not harder.

When FSC showed signs of backing away from its focus on the OCP last summer, some program watchers (including MixedWood) hoped that we may have turned a corner into a more positive direction.  The release of the new 40-004 draft, and the recent promotions of the Transaction Verification language make it clear that we were mistaken.  FSC has become an enormous and inflexible institution and needs a big push to change its direction.

Watch this space for more ideas soon on how to make FSC and CoC both stronger and more efficient.