In our last post (23 June 2016), we included a mention of a “Stakeholder Dialogue & Reception” that had been recently announced by the US affiliate of the Forest Stewardship Council (FSC-US) for 19 July 2016 in Charleston, South Carolina, USA. We were unclear at the time that the reason for this meeting – which includes members of the FSC International Board of Directors (BoD) – was the occasion of a scheduled BoD meeting beginning the next morning, also in Charleston.

That Board of Directors meeting has since been announced, and an agenda circulated to the membership. The agenda includes a number of important topics, one of which we wish to call attention to here.

Re-visiting Resolute and the Canada Problem

This past winter we followed with interest an unfortunate drama which developed and came to crisis between the Forest Stewardship Council (FSC) organization and one of its largest and most important members. Resolute Forest Products (RFP), under the leadership of CEO Richard Garneau, have earned a reputation among industry watchers for frank and critical commentary about the challenges of FSC certification – especially in Canada. They have also – significantly – taken a very aggressive stance against the influential campaigner Greenpeace, against whom they also have pending legal actions.

FSC Canada coordinated an attempt at reconciliation, which we wrote about last winter. It was clearly well-intentioned, but (in our view) rather brief, and ultimately unsuccessful. Unsuccessful enough, in fact, that the BoD is considering an action termed “destitution” – in effect a decision to ban Resolute from FSC membership.

The matter was brought up at the last BoD meeting in March (BM72). Here is an excerpt from the approved minutes (circulated to membership in April). 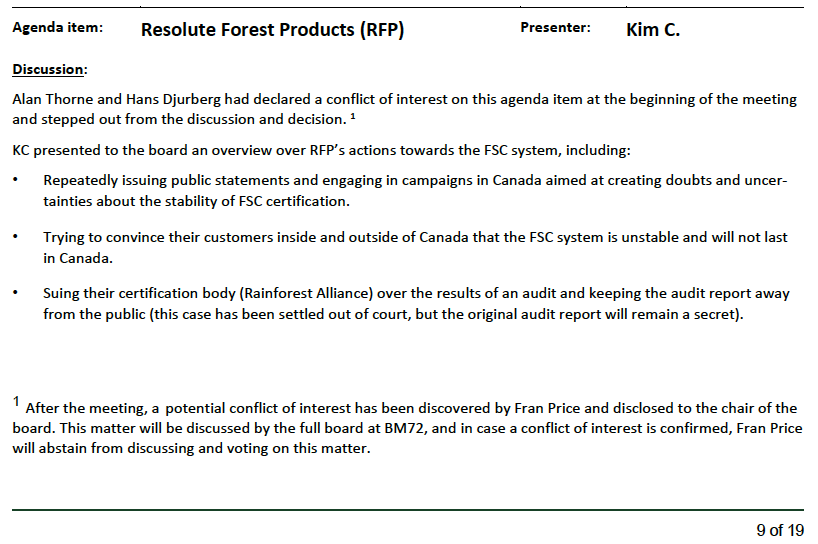 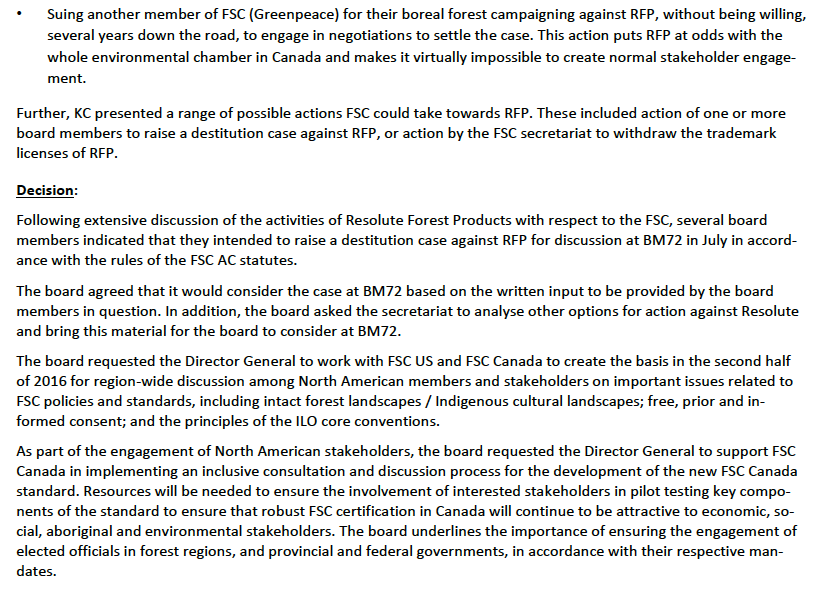 A few items of particular interest:

As expected, this subject appears again on the agenda for next week’s BoD meeting (BM72) in Charleston.

It is worth reviewing the actions that FSC staff cite (paraphrased from the BoD minutes) as reasons for removing RFP from FSC:

If it is unacceptable for FSC members to engage in public discussion about the heath and viability of FSC, then MixedWood – among many others – should be excluded as well. One of FSC’s great strengths is that it is founded and governed under democratic principals. Democracy is messy. It always has been and it always will.

We have no knowledge, and little interest, in the merit of Resolute’s legal actions against their former CB and against Greenpeace. It is worth noting, however, that these legal actions are being conducted within the judicial systems of Canada. Canada is far from a perfect society, but they are admired and respected around the world for their standards of civility and liberal governance. They do NOT need supervision or oversight from FSC.

Finally, it is worth remarking that the FSC Board of Directors has only 12 members, and three will likely be excluded from this decision. These three people are almost certainly the three best able to understand and provide wise council on this dangerous topic.

A Time for Caution

We will conclude this in much the same way that we concluded our earlier post on this subject, by quoting the FSC press statement of 4 Feb 2016:

FSC is a platform for democratic engagement with a long and successful history of bringing disparate interests together to solve challenging problems. This is what we do.

A vote to for “destitution” of Resolute Forest Products will not “bring disparate interests together”.  It will separate them.  More importantly, it will send a very dangerous message to the other 30,000+ certified companies around the world. It is much better that we roll up our sleeves and get back to the hard work of “democratic engagement”. After all, that’s what we do, isn’t it?