We last wrote about The Forest Stewardship Council’s (FSC) seemingly endless attempt to update its central Chain of Custody (CoC) standard last October.  At that time, we mistakenly called attention to the “last round” in a long and tiresome process to re-write the key traceability standard that over 30,000 certified companies rely upon to buy, sell, produce, and trade in FSC-certified goods around the world.

At that time FSC’s Board of Directors was charged with approving or rejecting a short list of controversial items on which the staff and working group had failed to reach consensus.  Chief among these open items, of course, was the concept of Transaction Verification and the question of implementing the infamous Online Claims Platform.  Rather than make a decision, FSC staff were charged with producing yet another discussion draft of the FSC-STD-40-004 v.3-0 standard (now Draft 3) which was published last week.  Stakeholders are invited to submit feedback and comments until 31 August 2016.  We encourage everyone to take part.

A Look at Draft 3

MixedWood has analyzed the latest standard draft and will be posting a full, annotated review in a couple weeks.  In the meantime, we would like to share our first impressions.

Technically speaking, FSC-STD-40-004 v.3-0 Draft 3 represents an improvement over earlier versions of the document.  It generally uses a clearer and more disciplined writing style, which should make it simpler and less troublesome to implement (if we ever get to that point).  A good example of this is in Paragraph 4 – Material Handling:

The simple and clear language here is almost refreshing – particularly when we consider the central importance of this particular clause.  If only the less-important parts of the standard could be stated so simply.

There are other examples, of course, where the drafting is less well done, such as in Clause 3.8:

This clause suffers from the double burden of being both badly written, and probably unnecessary.  We find generally that many of the longest and least-clear standard clauses address narrow and little-used subjects.

In spite of a number of examples of unfortunate language, we consider this latest draft to be (with one important exception) a real improvement over the current standard.

This new draft includes a proposed timeline for approval and implementation.

This means – in theory – that the Board of Directors will approve and publish the new standard late this year, and that it will become effective in the spring of 2017.  This will involve companies evaluating and implementing the new requirements, and subjecting themselves to audits, as soon as next summer.  If the OCP implementation process remains as proposed, this could potentially be rather challenging, and even disruptive to the marketplace.

It is worth remembering, however, that FSC has never, ever met a deadline like this before; and it seems unlikely that they will meet this one.

The One Important Exception: OCP again

Readers of this blog will be familiar with our consistent position on the Online Claims Platform (OCP).  We do not like it.  Draft 3 presents the OCP one more time, this time in a new Section 7, with this significantly unwieldy  title: “Providing transaction data for the purpose of transaction verification by the certification bodies”.  Positively Orwellian, is it not?

Section 7 and this new presentation of the OCP is too complex to be considered in detail here.  As weary as we are of the subject, we feel the need to unpack it in a separate article.  It is very clear that FSC staff remain determined to fully implement their monster transaction database, and determined to drag the rest of us along whether we want to or not.  Likely as not, they will succeed.  And that will be shame.

We received an invitation last week to a “Stakeholder Dialogue and Reception” that is being hosted by FSC-US in South Carolina, in July.  We applaud the idea behind this, in spite of the limited scope.  A 3 hour reception, scheduled by itself with only a month’s notice,  is not a very effective way to gather a national organization.  But it is a step in the right direction.

MixedWood is looking for someone who is planning to attend and willing share what they learn.  Please drop us a line if you can help. 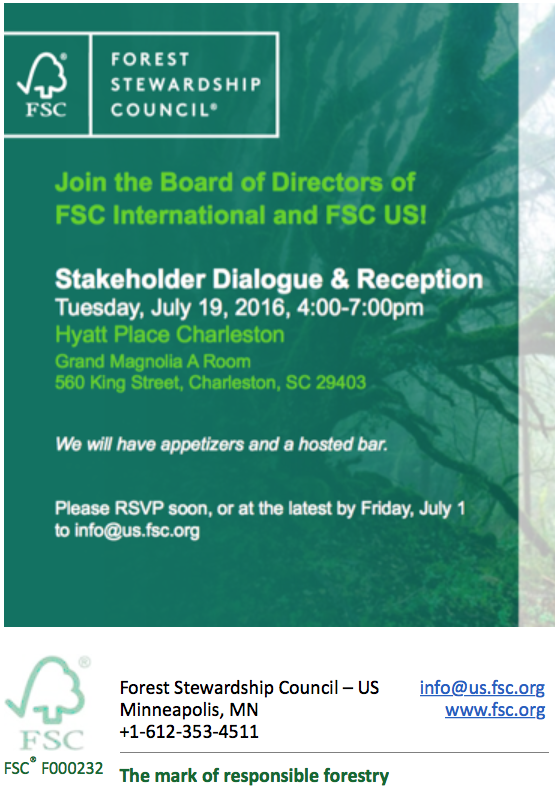