FSC: doubling down on the Myth of the Gap

If MixedWood is defined by one idea, it would be this:  Sustainable Forest Management (SFM) will always be hard.  So SFM certification programs – the tools we use to bringing SFM products to market – should not make it harder.

Chain of Custody (CoC) certification is, of course, the most widely applied of our SFM certification tools.  It should be simple.  But, as we all know, it is not.  Responsibility for over-complicating CoC is shared:  PEFC, SFI, and FSC all played a role.  But FSC are clearly the champions.

Because the Forest Stewardship Council (FSC) are still world’s the leading SFM program, and because they are in the middle of a major revision of the central CoC standard, we have given them a lot of attention this year.  We are particularly concerns about an initiative begun a couple years ago by (we think) a small group of FSC staff.  We call this issue “The Myth of the Gap”.  You can follow this link to read more about it.

FSC’s initial solution to “The Myth” was to commission a database designed to track and reconcile purchase and sales transactions on a global basis.  They called this their Online Claims Platform.  The basic idea is kind of dumb, and spending lots of money on it has not improved it.  Wisely, FSC backed off their original implementation plans and put the system effectively on hold.

The flaw in FSC’s latest innovation lies in the fact that it abandons one of the core concepts of Chain of Custody certification.  CoC gets its name because it works like a chain.  Each “link” in the chain is independent and integral.  If one link “breaks”, the chain parts.  Transaction Verification seems to be keeping the chain, but asking each link to ensure that its neighboring link does not break.  We cannot find anyone who knows what this would look like in practice, but we are very sure the result will be chaotic.

In recent weeks, FSC has been circulating yet another series of arguments in favor of their re-invention of CoC.  It is taking the form of a “survey” that is circulating among FSC practitioners around the world.  Here is the introductory letter: 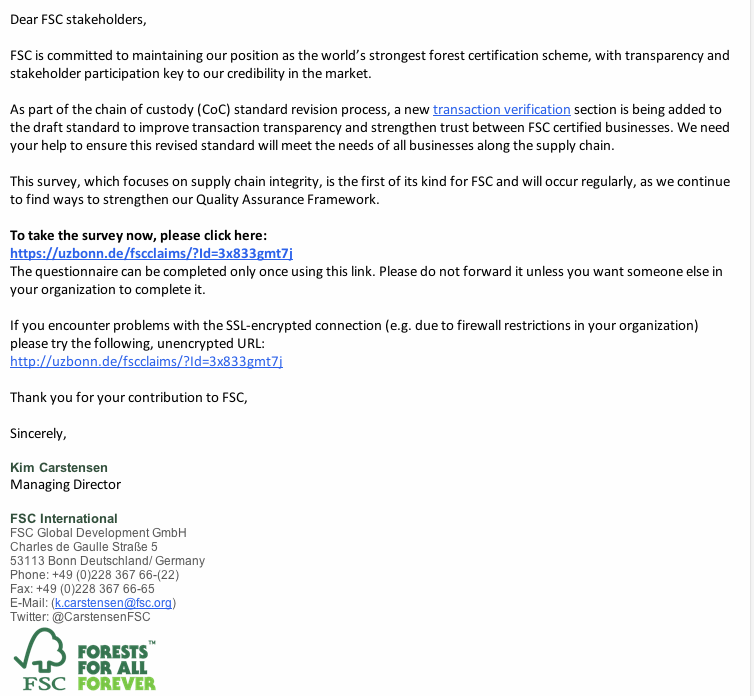 We see several troubling things here.  First, Transaction Verification is being described as something which “is being added” to the FSC CoC standard.  This suggests that FSC-IC are determined to ignore the overwhelmingly negative feedback they have received from companies who will actually have to implement it.  It is also frustrating to see that FSC is only now making its first effort to even sample whether “The Myth of the Gap” even exists.  This comes after they have designed, funded, postponed, and revised their own solution to the “problem”.

You can participate in the FSC Survey yourself by clicking here.  We found the questions disappointing in several ways – rather simplistic and leading in their tone.  More importantly, we were discouraged to see FSC continuing to combine two types of “misleading claims”: suggesting that minor and inconsequential errors (often caused by over-complicated standards) are equivalent to outright fraud.

This is not just wrong, it is downright misleading.  To suggest that the difference between the words “Mix” and “Mixed” matters to anyone at all is just absurd.  To recommend a radical overhaul of the whole CoC system to cure this “problem” is irresponsible.

Simplicity and a Global Strategy

Our attention was called this week to another FSC policy document that has seen rather little public attention.  The FSC Global Strategic Plan 2015-2019 v3.3 is still in draft form, but available online.  It is a long and splashy document, full of impressive and expensive graphics, and oddly worded goal statements.  We were interested (and cautiously pleased) to find the following (on page 13):

This seems to indicate that someone at FSC thinks that “a streamlined chain of custody” is a goal worthy of being assigned to “Objective 1.1”.  Does FSC have the organizational skill and determination to actually approach this goal?  We are doubtful, but eager to help.

Chain of Custody does not have to be complicated to be effective.  Practical recommendations for streamlining and simplifying the next standard update are on the table and deserve serious consideration.  If you agree, please make sure FSC hears from you.

A new version of the FSC-STD-40-004 v.3-0 discussion draft is promised for September.  MixedWood is eager (but not hopeful) to learn whether any progress toward streamlining will be evident.  Please watch this space for more updates as we find them.

It often happens that we learn more about a subject on the day after we post a new article in the blog.  This happened today when a colleague from Europe wrote with some fascinating new material.

It becomes even more clear that FSC staff in Bonn have fully committed to implementing OCP and radically re-directing CoC.  Here are some interesting new items to look at:

2) A “Roadmap” for implementation of Transaction Verification (TV) and the Online Claims Platform (OCP) in 2015-16.

3) A prospectus for a new pilot project to use FSC’s favorite new toy (OCP) to “simplify” trade in finished goods.

One thing is very clear:  FSC has fully demonstrated its ability to write new documents faster than its stakeholder community can read, comment, and react.  We are in for a wild ride!