Earlier this year, we wrote extensively about the Sustainable Forestry Initiative (SFI) program’s public consultation process for the update of their standards.  We gave SFI high marks for conducting a very thorough and transparent process to release a complete set of discussion drafts of its entire set of standards and guidance documents.  We also encouraged attendance at an ambitious series of public meetings that were held across the US & Canada.

The draft standards were – in a word – a bit weak.  They included some important new elements.  But they also retained most of the undesirable elements from the 2010-14 standards.  And the integration of old and new was often awkward and rough.  MixedWood provided detailed review of the sections we considered most relevant and important:  Section 2:  Forest Management & Fiber Sourcing; Section 3: Chain of Custody; and Section 4: Certified Sourcing & Labels.

Then we waited.  And waited.

SFI held its excellent annual conference in Montreal, Quebec, Canada just last month.  MixedWood attended and prepared a blogpost summarizing the standard review process so far.  The SFI staff provided a “sneak peak” of the updated standard on the last day of the conference, in the form of bound paper copies of the “final” draft version.    MixedWood’s copy sits here on my desk. 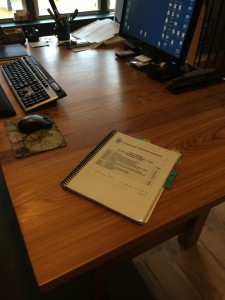 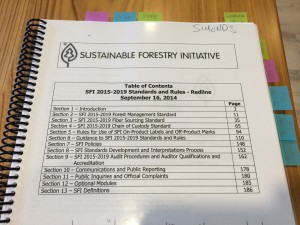 We would like to provide a link to this document.  But we cannot.  SFI provided copies to all the conference attendees, and (we’re told) to its member companies (Program Participants).  But they specifically asked that the document not be generally distributed.  We think this will prove to be a mistake.

Scope and Structure – The new document has been completely re-organized and restructured.  In most ways, this is a significant improvement.  The new structure aligns more closely with the way the standard is actually implemented, and is – as a result – more clear and transparent.  It should also be easier to understand, use, and explain.

Section 2: Forest Management (FM) – The FM portion of the standard is now refreshingly separate and distinct.  It includes some updates and changes – mostly dictated by evolving SFM philosophy and competitive pressure from the community (i.e. FSC).

Section 3: Fiber Sourcing (FS) – At long last, SFI has allowed this unique and powerful part of its program to stand up for itself in the marketplace.  Time will tell what value will be attached to it globally.  We hope that it will be recognized as distinct and separate from its sorry cousin, the Certified Sourcing (CS) standard (see below).  The details of Section 3 will be familiar to SFI companies – mostly established protocols with little change from the earlier standard.

Section 4: Chain of Custody (CoC) – The new CoC standard includes two, very important new elements that should not be overlooked.  The first is the inclusion of a mandatory Due Diligence System (DDS).  The second is a specific recognition of PEFC ST 2010:2013 as an “other credible chain-of-custody standard”.  Both of these measures will (& should) be criticized as insufficient.  But they do represent two vital steps towards making SFI relevant in a global context.

Section 5: Label Use – Finally, at long last, SFI has a Label Use standard which is only about label use.  It sounds like a small thing, but its not.

Section 3, Appendix 1: Certified Sourcing (CS) – The best thing that can be said about the new Certified Sourcing portion of the standard is that it is no longer hidden inside the label use standard.  Instead, it is hidden at the end of the Fiber Sourcing standard (yes, the irony is intentional).  Certified Sourcing (now thankfully distinct from Fiber Sourcing) remains SFI’s greatest liability and weakest element.  The 2015-19 version attempts to augment this program by adding Management System elements borrowed from the CoC standard.  This will – we think – only serve to further complicate application.  Click here and here to read more about CS and its problems.

Section 4: Chain of Custody (CoC) – The new version of SFI’s CoC standard contains no major flaws but (unfortunately) many minor ones.  The minor flaws are too numerous to catalog here, but mostly caused by awkward and inconsistent use of language.  In CoC, details matter.  Thousands of companies will spend thousands of person-hours untangling the meanings of these details.  Many of the minor flaws were noted (by MixedWood and others) during the earlier review period.  We can do better, and we should.

Section 13: Definitions – The standard includes three key terms which serve to define the certification status of forest products within the program.  These terms are Certified Forest Content (only FM origin), Certified Content (FM + Recycled + maybe Certified Sourcing), and Certified Sourcing (almost everything else).  These terms are not new, and by now should have been clearly defined.  Unfortunately they are not.  And the fact that these terms are scattered throughout the CoC standard, in ways that sometimes defy logic, is guaranteed to create havoc.

Things That Still Puzzle Us

Section 1: Introduction – Under “What the (Fiber Sourcing) Standard Covers”, we find the following (emphasis added):  “…applies to any organization with a fiber sourcing program that acquires roundwood and … chips, pulp, and veneer to support a forest products facility.”  Why does this include veneer?  Why not lumber, or pulp?  I have no idea.  I hope someone does.

Section 6: Guidance – A completely new Sub-Section 13 was added to the Guidance part of the new draft.  It (mostly) addresses CoC issues and is clearly intended to settle some important policy interpretations.  Included are a definition for Product Group (good idea, but poorly done); an Eligible Inputs definition for CS (probably in conflict with Section 3 & 4); and a fascinating, but confounding, new paragraph entitled: “Scoping Suppliers into a Chain of Custody”.  All of this language is new, and has not been seen by stakeholders.  Like the CoC flaws we note above, there is a real danger that they will create more problems than they solve.

The Bottom Line – not ready for prime time

It is clear that SFI has made some forward progress with this update to its standard.  They deserve credit for overhauling the structure of the standard in a way that genuinely improves its transparency and clarity.  We are disappointed that the moves toward full reconciliation with PEFC and incorporation of a real DDS requirement are still tentative, but understand the difficulty of making too much change too fast.

The major problem with the current, sort-of-public, final draft is that it does not appear to be finished.  There remains far too much language that is simply not clear.  In other words, it still needs work.  Is the staff working on a cleaned up, “final, final” version to present to the Board of Directors for approval?  We hope so.  The current version isn’t ready for prime time.