It has been nearly a year since the Forest Stewardship Council (FSC) published the latest version of its Controlled Wood (CW) standard (FSC-STD-40-005 v.3-0). MixedWood introduced the new version, in an article written last January, this way:

This update has been in the works for nearly 5 years and the subject of seemingly endless discussion, debate, analysis, and hand-wringing.  Two discussion drafts were released – the first in the fall of 2013 and the second in late 2014.  This final, approved document – sadly –  bears little resemblance to either of them.  More importantly, because the FSC system relies on a complex series of interconnected documents and guidelines, this new, approved standard represents only a piece of an ongoing revision process for the Controlled Wood System that promises to continue for some time to come (click here to see lots and lots of detail).

We were confident that, by the end of 2016 the challenges of this important update would be well understood, and that implementation of the new standard would be well underway. As with so many predictions concerning the FSC, we were wrong.

Where We Stand Today

In spite of many months of hard work on the part of Certification Body (CB) staff, FSC national affiliates, and busy consultants like MixedWood; version 3-0 has only been implemented by a small handful of companies. One interesting case study was published by NEPCON just this week.

The great majority of CW companies continue to rely on existing certificates against the older standard (FSC-STD-40-005 v.2-1). Everyone appears to be waiting for someone else to go first. In the meantime, FSC staff continues to stick to their original published timeline that requires everyone to complete the transition by 30 June 2017. For a variety of reasons, this looks less and less likely. 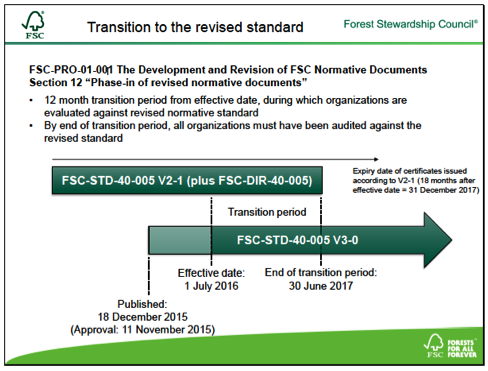 How Did We Get Here?

It is becoming clear that we have gotten ourselves into quite a mess. As usual for this sort of thing, there are a number of reasons:

At this point, the five CB’s who have significant CW certification business in North America are desperately trying to engage with their clientele. It appears likely that FSC will, indeed, be publishing a new version of FSC-STD-40-005 (v.3-1) in the next month. Our expectation is that changes in the new version will be limited in scope: re-naming the short-lived “simplified” Risk Assessment in favor of extending the recognition for existing “company” Risk Assessments. Too bad we didn’t know that in August.

The updated Accreditation Rules (STD-20-011 v. 3-0) require that the first audits against 40-005 v.3-0 follow an extended protocol, previously unknown in the world of Chain of Custody (CoC) auditing. Because a “stakeholder consultation” is required, and because stakeholders must be allowed a full 6 weeks to respond, CB’s are attempting to engage their reluctant clients in a 8-10 week program that looks like this (used with permission from SGS):

Our own market analysis tells us that there are about 250 CW-certified companies in North America. About 40 are pulp and paper mills, 100 are sawmills, and 80 do some sort of solid wood manufacturing. All rely, to some extent, on FSC Controlled Wood certification to support their business. At present, not one has transitioned to 40-005 v.3-0.

In practice, we understand that some fraction of these companies will abandon CW as too much trouble. This extended protocol, of course, comes at a cost, and most CW companies are just now learning that their certification fees are about to double. The companies that decide to continue (in theory) need to be re-certified to the requirements of version 3-0 by 30 June 2017 or have their certification suspended. A quick glance at the timeline above will tell you that we are in trouble. Allowing for a month between audit and certificate issue, and adding in the 10-week timeframe mandated by FSC, this means that the very last transition audit will have to be initiated by mid-March 2017.

To put it another way, about 200 Controlled Wood transition audits need to be conducted in the US and Canada between now and mid-March. That will require a limited pool of qualified auditors (we estimate about 35) to conduct about 15 audits per week beginning next week. Will this happen? We are doubtful.

The community is beginning to search for solutions. In addition to its Russian case study (above), NEPCON also posted an unusual white paper advocating substantial changes to version 3-0 and the transition process. Other, less formal discussion has become active.

How to Find Help

When we introduced 40-005 v.3-0 last year, we included a paragraph in our post under the heading “Don’t Panic!”. In spite of everything above, we still think this is good advice. The FSC did a poor job of drafting the new standard. It is much too complex and difficult to follow. Its conceptual basis, however, holds some promise for the future.

We agree that implementing version 3-0 is likely to be very challenging in parts of the world where real and substantive risk of unethical sourcing is present. Here in North America, however, this is not the case. US and Canadian companies have been managing for years with an ill-considered format using both geographic risk assessment and formal source verification. The new standard offers us a chance to streamline this and restructure our supply chains along the lines of internationally recognized DDS formats. In our low risk environment, this should be a meaningful business advantage.

It may be self-serving for us to say so, but the fact is, for many companies, the services of a good consultant will be needed. MixedWood has been working on our own implementation strategy that we think will prove a success for our clientele. We know of others that are working along similar lines. We have delayed our roll-out, along with everyone else, because of the mayhem described above. Now, it looks like it is time to act. If you are planning to make the transition and would like someone to work with, please drop us a note.

An email was circulated by FSC-IC, entitled “Technical revision of the controlled wood FSC-STD-40-005 V3-0 and clarifications to the requirements”.  It includes several interesting and helpful tidbits of information about this rapidly evolving situation, including:

Here is the complete text.

It gives us no pleasure to observe this out as yet another example of the deeply dysfunctional condition of the FSC standard generating system.  Issuing informal, clarifying interpretations before an important standard has even been implemented is NOT healthy.  Neither is it healthy to leave the entire community guessing over “clarifications to the requirements” for 6 months.

Since posting this article – just last week – we have received notes and calls from several contacts in the CB community.  It is becoming very clear that the transition process to STD-40-005 v.3-0 is going to be VERY disruptive.  This is particularly true in the solid wood sector in North America.  Controlled Wood claims for key solid wood products (lumber, sheet goods, etc.) rely heavily on a wide array of small to medium-sized companies.  These folks have largely ignored the debate, discussion, and recent warnings about the version 3-0 transition.  Now, facing a deadline, they are not welcoming the changes.  How many will drop out?  How many will grit their teeth and soldier on?  Time will tell.