CoC SHOULD BE EASY! – Part 4: Due Diligence Systems (DDS)

Another installment in our continuing series on forest product Chain of Custody (CoC) certification – based on a simple idea:  CoC doesn’t have to be complicated!  We have tried to illustrate this by breaking down the popular CoC standards (PEFC, SFI, & FSC) into their constituent parts.  Part 1 looked at the “guts” of CoC:  the nitty-gritty details of the invoices and packing lists that auditors are always asking for.  Part 2 outlines the ISO-based management system requirements that come along with the third-party certification world.  Part 3 looks at the accounting rules and operating options (Transfer, Credit, & Percentage) of the three programs.  This installment will begin our exploration of some of the specialty areas in CoC – subjects that many CoC companies might safely ignore.  It’s good to remember, though, that while your company might not need (for example) a FSC Controlled Wood system, your supplier, or perhaps your customer, probably does. In this article we will explore the Due Diligence formats of the PEFC, SFI, and FSC programs.

What is Due Diligence?

We introduced the concept of Due Diligence systems in the last installment of this series, under the topic of “Complex CoC”.  Complex CoC models, using the Credit and Percentage accounting rules, allow us to mix our inputs, as long as we maintain a minimum acceptable standard for what we are mixing.  This is where the Due Diligence comes in.  It provides the minimum standards for the “other” material, and sets the expectations for ensuring that unacceptable or “controversial” inputs are avoided.

The terminology used to describe and define Due Diligence has tended to be bit confusing.  Much of this can be attributed to the relative immaturity of these programs.  Some if it is just sloppy use of language.  The terms “Controlled Wood”, “Avoidance of Controversial Sourcing”, “Non-controverial sourcing”, and “Due Care” can all be generally considered synonymous with Due Diligence.  It is common to see “DDS” used to refer to “Due Diligence System”.  And you’ll also often find references to “Risk Assessment”, “Certified Sourcing”, and “Responsible Sourcing” used in ways which may or may not be related.

FSC introduced Due Diligence to CoC in the first version of its Controlled Wood Standard back in 2004.  The initial format was a bit messy and confused, leading to several updates and clarifications.  The current version (FSC-STD-40-005 v.2-1) dates to 2006 and is extensively implemented around the world.  Implementation of FSC Controlled Wood is still – unfortunately – rather complex and confusing; but the marketplace has learned to live with it.  A major update has been in the works for over 2 years and is expected be finalized early next year.

SFI approached the Due Diligence challenge very differently.  In all honesty, they basically ignored it.  If  you turn to paragraph 3.6.1 in the current SFI CoC standard (SFIS 2010-2014, Section 3 – page 8), you will find the reference excerpted to the right.  SFI is basically a North American certification program.  Most SFI-certified companies are located in and procure their raw material from North America.  So the affect of this language (the heading of 3.6, and the first phrase of 3.6.1) has been to exempt SFI CoC from the requirements of Due Diligence.  As you may imagine, this has been the source of much criticism over the years.  Some have described paragraph 3.6 as an elaborate fudge, others have labelled it as blatant greenwashing.  I would suggest that the real story is more subtle:  SFI opted for a simple and cost efficient way to recognize the fact that North America is – in fact – a very good place to source wood products.  Like FSC, SFI is currently engaged in a major revision of its standard and we are told that this section will be substantially revised.

PEFC initially approached Due Diligence in a quite simplistic manner.  It required that “Controversial Sources” be avoided, but it defined the term very narrowly to include only illegally logged wood sources.  To demonstrate that its non-certified inputs were acceptable, a PEFC CoC company had only to secure self-declaration statements from its suppliers that stated that the wood was legal.  Over the course of several revisions, this expectation has evolved and expanded considerably.  The latest version (PEFC ST 2010:2013) is heavily influenced by the legal requirements of the European Commission Timber Regulation (EUTR).  It is quite detailed and (unfortunately in our view) rather complex to read and understand.  The good news is that it defines a format that is quite rigorous, and considerably more flexible than FSC.

It is possible to purchase non-certified wood products that have already been subject to Due Diligence.  In the FSC & PEFC world, this material comes to your CoC system with a formal claim statement which can be verified, processed, and recognized just as any other CoC claim.  FSC material is identified as “FSC Controlled Wood”.  PEFC material as “PEFC Controlled Sources”.  This efficient and sensible process allows Due Diligence to function in the broad, wood product marketplace.

Designing a Due Diligence system for a CoC company can be challenging.  This is usually NOT because the inherent subject is complex, but rather because of overly complex and badly documented standards and guidance.  This article does not try to provide a detailed guide for implementation.  We can, however, offer a general outline that should provide a “big picture” view of how the programs interact in the real world.  Something we hope you will find helpful. 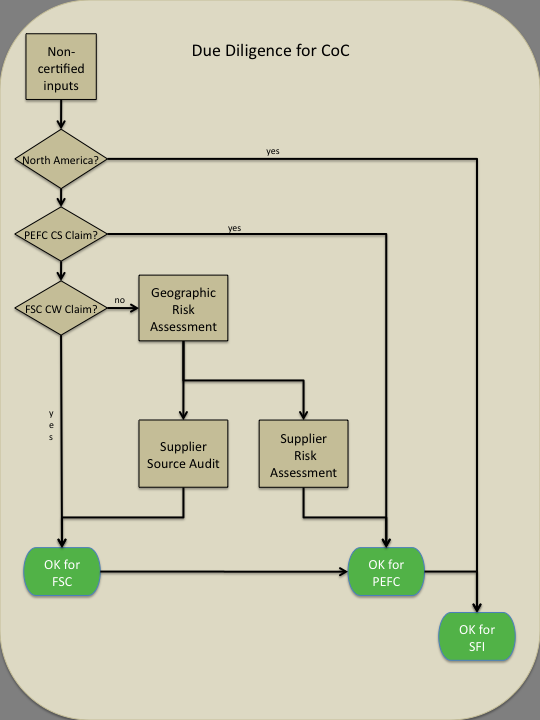 This flow chart depicts a basic Due Diligence decision tree for evaluating non-certified inputs to a CoC certified company that uses one of the complex CoC formats (credit or percentage).  It is intentionally simplified, but should cover a very large percentage of potential options.

The next option functions similarly for FSC and PEFC.  If material inputs are received with a formal DDS claim (“Controlled Wood or Sources”), it can be accepted and used without further effort.  This path accounts for a very large part of the market for DDS-approved material.

Material received to a PEFC or FSC system without a formal claim has to be subjected to a formal evaluation process.  Both programs require a two-step procedure, but – unfortunately – the details vary.  The geographic Risk Assessment is common to both programs.  The supplier-level evaluations, however, differ.  For practical purposes, a “low risk” conclusion is required for each evaluation in order for the material to be judged acceptable and “non-controversial”.

The subject of Risk Assessment will require separate consideration.  In theory it is not a complicated idea.  In practice, and particularly for FSC, it has proven controversial and even a bit political.  We will have more discussion on this topic very soon.

Finally, the bottom of the flow chart shows the practical interaction between the DDS procedures of the three programs.  These relationships are not formal – none of the programs explicitly recognize the other.  But practitioners have found that material qualifying for the FSC Controlled Wood claim, can nearly always be found acceptable in both a PEFC DDS system and a SFI claim of “avoidance of controversial sources”.  The relationship is one-way however, as the FSC format is too detailed and inflexible.

Due Diligence systems are quite possibly the most user-specific aspect of certified CoC.  This does NOT mean that they must be complicated.  MixedWood has designed Due Diligence systems for clients; with well-managed, local supply chains; that operate entirely within established procurement programs and are maintained with a simple once-a-year review and update.  We have also designed very complex systems with multi-level decision-trees, internal cross-checks, and extended implementations.  The latter systems were for companies with extensive and complicated supply chains stretching around the world.

The key to success is always the same: carefully adapt the DDS requirements to existing business needs and supplier relationships.  Always avoid adding any unnecessary or duplicative steps.  Done carefully, a DDS can be an effortless process that actually adds value.  Done hastily, it can be a major burden and constant headache.

It’s worth noting that terms like Due Diligence and Due Care are commonly used in relation to some very important legal requirements for wood product companies – in particular the EUTR and the US Lacey Act.  All the CoC programs have been promoting their standards as mechanisms for complying with these laws.  Whether they do that for you is a question for your legal counsel.

It may be a stretch to describe this part of our CoC business as simple and straightforward.  But it is also a mistake to throw up our hands and resign ourselves to frustration.  There’s always a solution, because CoC SHOULD BE EASY!  Right?